Giant River Turtle (Podocnemis expansa) having carapace marked for future ID by Franklin Tovar
CAPTIVE-REARING PROGRAM FOR REINTRODUCTION TO THE WILD
CITES II IUCN ENDANGERED (EN)
Orinoco River, 110 Km north of Puerto Ayacucho. Apure Province, VENEZUELA. South America.
L +- 90cm, Wgt 30-45kg. Largest fresh water river turtle in S. America. Eggs round & 42mm. 90-100 per clutch. 6-8 wks incubation. Females come ashore to sun themselves for several days before laying to boost egg development and lay when the river is at its lowest. Herbacious and live in white or black water rivers moving into flooded forests during the wet season to feed on fallen seeds and fruit.
RANGE: Amazonia, Llanos & Orinoco of Colombia, Venezuela, Brazil, Guianas, Ecuador, Peru & Bolivia.
Project from Base Camp of the Protected area of the Giant River Turtle (& Podocnemis unifilis). (Refugio de Fauna Silvestre, Zona Protectora de Tortuga Arrau, RFSZPTA)
Ministery of Environment Camp which works in conjuction with the National Guard (Guardia Nacional) who help enforce wildlife laws and offer security to camp staff. From here the ministery co-ordinate with other local communities along the river to hand-rear turtles for the 1st year of their life and then release them. The ministery pays a salary to a person in each community that participates in the project as well as providing all food etc. The turtles are protected by law and there is also a ban on the use of fishing nets in the general area. During the egg laying season staff sleep on the nesting beaches to monitor the nests. All nests layed on low lying ground are dug up and relocated to an area not likely to flood. They are then surrounded by a net to catch all hatchlings who will then spend the 1st year of their life in captivity to increase their chances of survival. Biometric data is taken from any female that has layed eggs and is returning to the river. Also animals that are subsequently caught by fishermen etc are marked 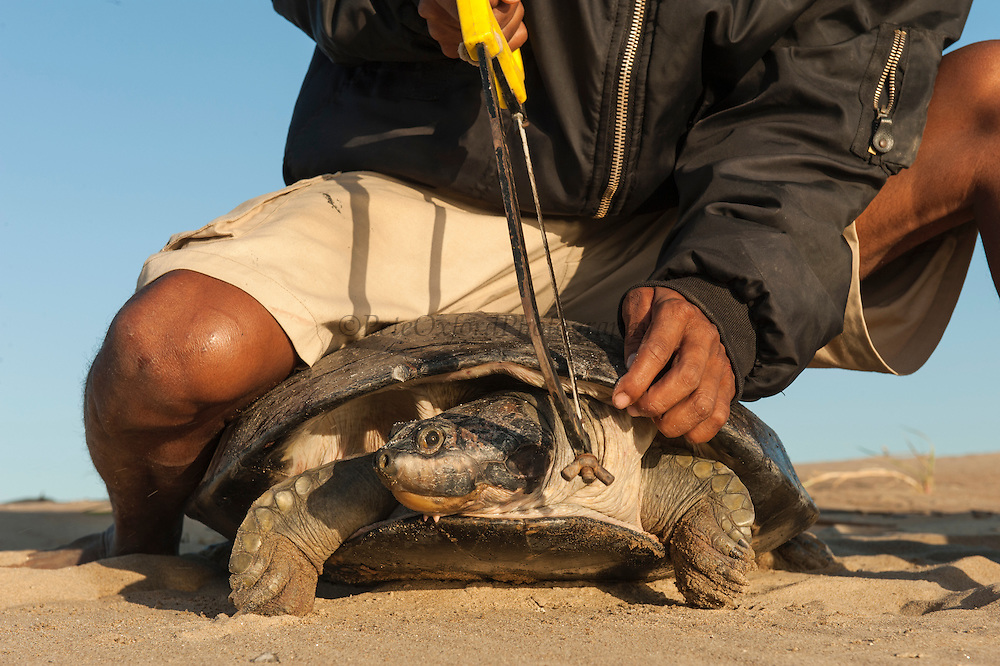