Mehrangarh Fort of Jodhpur and Jaswant Thada in the foreground. Rajasthan, INDIA
This is one of the most impressive fortresses in rajasthan. Perched on top of a rocky cliff 400 feet above the plain, it has a commanding view of the surrounding area. The fort itself is divided broadly into 3 areas: the outer court, with its old stables and kitchens, the Durbar hall, reception rooms and maharajas palaces and finally the zenana, or queen's palaces. The palace complex constructed around a series of interconnecting courtyards and adorned with breathtaking carved sandstone filigree was first built in 1459 and added to over the centuries.
The Jaswant Thada is a graceful marble cenotaph (tomb) of Maharaja Jaswant Singh II (reigned 1873-95) and those of the other Maharajas who died in this century.
The Kingdom of Jodhpur was established in the 12th century but in the 15th century the fort and city walls were constructed and they still stand today. Jodhpur is the second largest city in Rajasthan with a population of 1.3 million. Jodhpur may be called the 'Blue City' from the characteristic pale indigo colour of its traditional homes. Originally the color signified the home of the Jodhpuri Brahmin but the copper sulphate in the paint seems to ward off termites and mosquitos so many people then followed the traditional of painting their homes blue. The very narrow streets are filled with colourful bazaars where merchants are selling their wares. 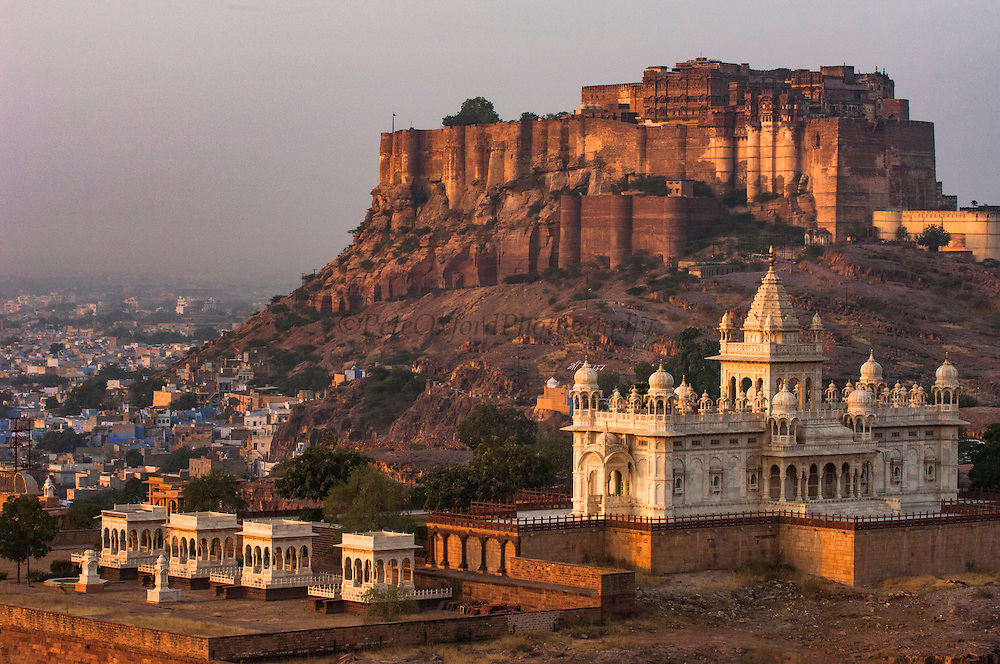